Dichlor: Should You Use This Type of Chlorine in Your Pool?

“What type of chlorine should I use?”

This is the inevitable question all pool owners ask, and, unfortunately, the answer isn’t quite as simple as you hoped it would be. (Don’t worry, I’ll try my best to simplify it.)

Dichlor is just one of those types. Like the rest, it has it’s place in the pool maintenance ecosystem, but today, we’ll explore if you should be using it in your pool.

Dichlor—or “Dichloro-S-Triazinetrione” if you’re inclined—is one of five common types of chlorine that can be used to sanitize pool water, though it’s often compared to trichlor as they share many of the same properties.

Note: Unlike trichlor, dichlor can comes in two sub-types. These are “dihydrate” (with water) and “anhydrous” (without water), though this difference is not visible to the human eye. Most dichlor products are dihydrate.

You’ll typically find dichlor chlorine in granular form, which comes in either small 1lb bags or large, sealable tubs. It has a pH level of around 6.5 (close to neutral) with around 55%-62% free active chlorine. The granules are usually pre-dissolved in a bucket before adding to the pool, and sometimes directly added to water or applied through the pool skimmer.

Dichlor can occasionally be found in tablet form (they look a bit like hockey pucks), in the usual 1″ or 3″ sizes, which are then slowly dissolved in the pool using an automatic chlorinator, floating dispenser or pool skimmer. Dichlor tablets aren’t nearly as common as granular dichlor, however. 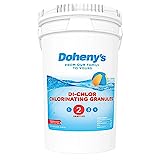 How Does Dichlor Chlorine Work?

Dichlor works the same way trichlor, calcium hypochlorite or any other type of chlorine works; through a chemical reaction.

When the dichlor reacts with water, it quickly turns into hydrochloric acid and hypochlorite ions—also known as “free chlorine“—which then attacks foreign invaders and other microscopic threats in the water.

The chlorine latches to these invaders, breaks down the cell walls and destroys their programming (so to speak), effectively rendering them harmless. This reaction turns the once free chlorine into combined chlorine — also called chloramines.

Chloramines continue to build up in the water until they’re oxidized (turning them into gas), and oxidation, ironically, is triggered by a large injection of free chlorine. This is called “shocking“, but we’ll talk more about that later.

By now, you might be thinking: “Well, if all chlorine works the same way, why does it matter which type of chlorine I decide to use?”

Let’s talk about that next.

The Pros and Cons of Dichlor

So far I’ve just thrown a bunch of descriptions and facts at you, but I’ve yet to talk about what these mean from a practical standpoint, and more importantly, if dichlor is even a smart option for sanitizing a pool.

In this section, I want to break down the pros and cons of using dichlor for regular chlorination, along with a few things that could swing either way.

The Benefits of Dichlor

The Drawbacks of Dichlor 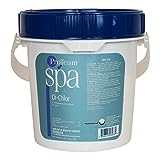 Why It’s NOT IDEAL for Daily Chlorination

Keeping your pool properly chlorinated is an ongoing task, and the type of chlorine you decide to use will either make that job easier, or harder.

The main issue with using dichlor is the fact that it contains such a high amount of cyanuric acid (pool stabilizer), and while the chlorine gets used up in a matter of days, the added stabilizer degrades at a much slower rate, which soon causes a buildup.

Yes, cyanuric acid is useful for pools that are exposed to the sun. Necessary, even. But if you have too much of it in your water, your chlorine doesn’t work as efficiently, which means you need to add even more chorine, which adds even more cyanuric acid… and the cycle continues.

For that reason, I only recommend using dichlor if your cyanuric acid level is already very low (aim for between 30ppm and 80ppm), as this will be a relatively fast way to bring it back up while adding the necessary chlorine to your water.

So What Should You Use Instead?

Typically, for regular chlorination, you’ll want to use trichlor tablets which not only contain less cyanuric acid, but can also be (mostly) automated using an automatic chlorinator or floating dispenser.

And yes, you’re still adding cyanuric acid (pool stabilizer) to your water, even if it’s at a slower rate, so you’ll still need to keep an eye on your level to make sure you don’t exceed the recommend range.

If that happens, or you already have enough stabilizer in your pool, you’ll need to use a unstabilized chlorine for the rest of the summer. I recommend liquid chlorine, though this is a manual daily process for most people.

Note: As of recently, there are now products that will reduce the cyanuric acid in your pool, but results have been very mixed according to the community. Treat this as a last resort.

Why It’s Bad for Pool Shocking

As chloramines (or combined chlorine) build up in your pool, it has a few unwanted side-effects such as reducing the effectiveness of your free active chlorine, and causing skin, eye and even potentially respiratory issues.

Shocking your pool—which means adding 10x the level of free chlorine relative to combined chlorine—is a weekly or bi-weekly task that oxidizes the combined chlorine, essentially removing chloramines from your pool water.

In theory, you can do this with any type of chlorine, but since you’re adding a large amount, you need to be careful about what you’re putting into your pool. As you know, it’s usually not just chlorine.

As for dichlor, if the large doses of cyanuric acid is a problem for regular chlorination, it’s going to be an even bigger problem for shock because you’re adding 10x the amount — not to mention it will take longer for the spike to burn off for the same reasons.

So, as with daily chlorination, you’d only want to use dichlor to shock your pool if you need to quickly and dramatically raise your pool stabilizer level, but that can be more easily controlled with pure cyanuric acid anyway.

So what should you use for shocking?

Well, calcium hypochlorite is another granular form of chlorine, and unlike dichlor, it’s unstabilized (no cyanuric acid) which makes a popular choice for shocking a pool. 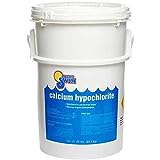 In The Swim Calcium Hypochlorite...
Buy on Amazon

Dichlor is a fairly common type of chlorine in the industry, but it’s one that comes with a number of strings attached that ultimately make it difficult to recommend to most pool owners.

Instead, consider trichlor tablets for a more “hands off” approach with less risk of overdosing your pool on stabilizer, or liquid chlorine for a more manageable (albeit manual) application of regular chlorine.

If you do decide to use dichlor, just be sure to keep a close eye on those levels and be ready to switch to a non-stabilized chlorine when the time comes, such as liquid chlorine.

Best Pool Skimmers: A Detailed Review & Buying Guide
Pool pH Level: Why It’s Important (And How To Balance It)
Borax In Your Pool: Everything You Need to Know
Liquid Solar Blankets: Here’s What You Need to Know
What Causes High pH in a Saltwater Pool? (2 Simple Reasons)

poolonomics.com is a participant in the Amazon Services LLC Associates Program, an affiliate advertising program designed to provide a means for sites to earn advertising fees by advertising and linking to Amazon.com.