Calcium Hypochlorite: Should You Use This Type of Chlorine in Your Pool?

Regardless of whether you own or maintain a pool, chlorine has long been a familiar chemical in the swimming pool industry.

Not only is chlorine a highly effective pool sanitizer, but it’s also the most inexpensive sanitizing agent on the market. In fact, it’s for that reason that most of the world’s swimming pools rely on chlorine in the first place.

Of course, not all chlorine is created equal, and understanding what separates the various types of chlorine products is essential for proper pool water treatment. Today, we’ll be taking a look one type in particular; calcium hypochlorite.

What is Calcium Hypochlorite?

Calcium hypochlorite—or what most people just call “cal hypo”—is one of various types of chlorine you can buy, and it looks exactly how you’d expect pool chlorine to look.

It’s mostly commonly sold as a white, chlorine-smelling powder/granules, which are then poured directly into the pool water, or sometimes via the pool skimmer. It has a highly alkaline pH level at around 11-12, and contains anywhere from 65-75% free available chlorine.

These are typically sold in 1lb bags, but it’s worth considering a bulk-buy if you’re planning to use cal hypo regularly. 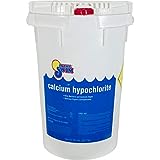 It’s also less commonly found in tablet form. It looks like a white hockey puck in either 1″ or 3″ sizes, which is then dissolved and drip-fed in a specialized feeder. It has a slightly lower pH level of around 9.

Regardless of physical form, neither the powder or tablet versions of calcium hypochlorite contain pool stabilizer (cyanuric acid) to protect against the sun, but instead contain calcium which raises your pools calcium hardness level over time.

How Does Calcium Hypochlorite Work?

Well, it works just like any other type of chlorine.

After adding calcium hypochlorite to your pool, the chlorine quickly reacts with the water to form Hydrochloric Acid. It’s this acid that attacks and kills the microscopic bad guys floating around.

It does this “killing” by combining with any threat it encounters, breaking down the cell wall and effectively rendering it useless. The resulting combined chlorine is also referred to as chloramines.

Now, just because it works fundamentally the same as any other type of chlorine once it’s in the water, each have unique qualities that you need to understand in order to choose the right chlorine product for your specific use-case.

Let’s tackle that next.

The Pros and Cons of Calcium Hypochlorite

Thinking of using cal-hypo in your swimming pool?

So far I’ve just thrown a bunch of descriptions and facts at you, but I’ve yet to talk about what these mean from a practical standpoint, and more importantly, if calcium hypochlorite is even a smart option for sanitizing a pool.

Why It’s Bad for Daily Chlorination

Keeping your pool properly chlorinated is an ongoing task, and the type of chlorine you decide to use will either make that job easier, or harder.

Having to manually add chlorine to your pool on a daily basis is already a big ask for anyone with a life, but couple that with the time and energy it takes to pre-dissolve a bag of calcium hypochlorite, and you quickly enter deal-breaking territory.

If that wasn’t bad enough, using calcium hypochlorite every day will eventually raise your calcium hardness levels way above the recommend range, not to mention the complications surrounding daytime use considering it doesn’t contain any pool stabilizer.

Note: Yes, calcium hypochlorite tablets eliminate some of these issues, but they’re harder to come by and also require a specialized feeder because they dissolve too quickly and become a gooey mess. 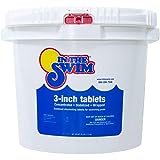 While calcium hypochlorite is poorly designed for daily chlorine application, it’s these same flaws that make it a perfect candidate for another common use-case; shocking your pool.

And that leads me nicely to…

When combined chlorine (chloramine) builds up too much in your pool, it can start to prevent free chlorine from effectively doing its job, as well as causing skin and eye irritation.

Note: You’ll know if you have a buildup of chloramines because they give off that familiar chlorine smell. A stronger smell means a stronger buildup.

To remove the chloramines from your pool water, you’ll need to “shock” your pool. This process involves adding 10x the amount of chlorine to your pool as there is chloramine, which breaks up the chloramine molecules, causing them to off-gas (oxidize).

It’s a good idea to do this once per week to prevent a strong buildup of chloramines, but shocking can also be used to fight an algae bloom or other contaminants entering the water, such as human waste. Yep, it happens.

In theory, you can shock your pool with any type of chlorine as long as you add enough of it, but calcium hypochlorite is particularly suited because, as mentioned above:

And because shock requires a less frequent application, the added calcium and slight increase in pH is much easier to manage, especially when the rest of your water chemistry is properly balanced.

Getting to grips with the different types of chlorine can be challenging for new pool owners, but hopefully you can now tick calcium hypochlorite off your list.

While trichlor tablets and liquid chlorine are better options for regular chlorination, cal hypo takes the crown when it comes to shocking your pool—whether it’s a standard weekly shock or an emergency treatment.

Calcium Hypochlorite: Should You Use This Type of Chlorine in Your Pool?

How To Get Rid Of Water Bugs In Your Swimming Pool

Poolonomics.com is a participant in the Amazon Services LLC Associates Program, an affiliate advertising program designed to provide a means for sites to earn advertising fees by advertising and linking to Amazon.com.